Beat By A Monster

Don Shetterly 0 February 5, 2018 12:01 am
What Your ADHD Child Wishes You Knew Book Review
Keeping Ego And Judgment Out Of Healing
Intuition In Healing Work

Back in the good old days, there was preaching and church. There was chopping that wood. There was going to school, hungry and cold.  Being beat as a little boy was as common as apple pie, maybe more common.

It was the best of times.

It was the worst of times.

A boy being beat was all I knew.

For the monster told me so.

You see, we didn’t have much. A hat and mittens were something special. They weren’t plentiful for us, like all the other kids. I guarded mine with my life. Plus, they helped keep little hands warm. I never understood why the older kids tried to take them from me. I never understood why the bus driver would scream at me for trying to get them back.

This world sucked, but the one at home was no better.  My father had a temper. His temper often ignited without a moment’s notice. He beat my older brother so badly one day out in the barn that I can still hear the screaming and wailing from inside the house.

My father was not a nice man. He was not a good father.

I remember one time being beaten for something so little and insignificant. I was not a bad kid. You didn’t see me acting up, because I was always trying to be the model child. Well, the fear of getting punished was far too much for me. The consequences of punishment were too severe.

That day though, I remember him pulling my pants down and taking his belt off. He whipped me good. Damn it, he was going to show me how to behave. I tried to force back the tears for I knew if I didn’t, things would only get worse.

This time though, he surprised me. Instead of being proud of me for not crying when he was beating me with his belt, he was angry. I infuriated him because I wasn’t crying and so he said the words I still do not forget. “I’ll give you something to cry for!” And did he ever!

Then, I started to cry like a baby boy. I was not man enough to withstand his punishment.

The next thing I knew, he reversed his stance and now was angry at me for acting like a baby and not taking it like a man. Yep, this six-year-old boy could not take a punishment like a man. There was no winning. This life was normal to me. It was the good ol’ days.

He had me downstairs in the basement away from everyone.  I screamed, but of course, that only infuriated him. Afterwards, the house was quiet. Nearly no one spoke a word. It was a haunting silence.  No one talked about the little boy being beat.

Beat By A Monster

Yep, it was the best of times.

It was the worst of times.

A boy being beat was all I knew.

For the monster told me so.

Further Reading On Healing From Abuse

Read All Of Don’s Columns 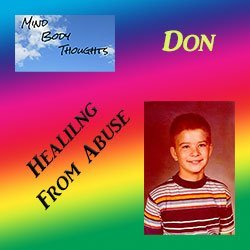