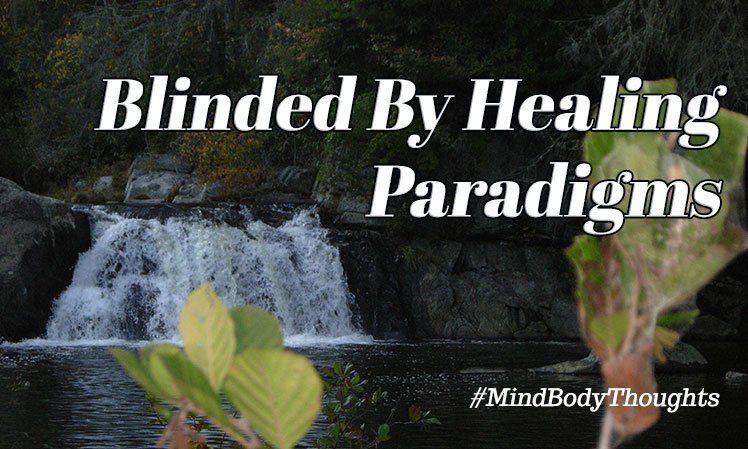 It is far too easy to go into our little corner of the healing world and emerge seeing everything through our filters.  We are blinded by healing paradigms we hold on to in life.   It does not just apply to the medical world.  It also applies to the new age and alternative therapy industry.

I realize that everyone in the medical and alternative therapy fields has had training respective to their licenses and certifications.  Schooled in a thought process of healing, practitioners do what fits within the scope of their training.  While that is often necessary, it can hold us back when we don’t see the whole picture.  In these experiences, we can become blinded by healing paradigms we hold.

I remember back in my own life when I was prescribed medications for anxiety and depression.  There was no instruction on what I needed to be doing to deal with this.  It was like, here’s the magic pill that will make everything better.  Fortunately, I was wise enough to go to counseling so that the medication did not become my sole sustenance in life.   The medical providers, in this case, were blinded by healing paradigms and not seeing the whole picture.  They were missing the combination of therapy along with medication to help me heal my life.

In other ways, I have had people from the alternative therapy fields come up with all types of treatments.  The claims made on some of these things don’t pass the sniff test.  Faulty science and logic were either used or so manipulated that it was full of holes.   While I believe that there are treatments that cannot be 100% backed up by current research procedures, I think we have to be very careful in what we claim as truth.

Truth in healing is the same as being blinded by healing paradigms.  We find something that works, and then we build a curriculum or thought process around it.  We mold our beliefs and opinions into what the central core truth says, but we water down the effectiveness of the modality.  At that point, we lock on to the paradigm as being all that matters, while dismissing other vital elements of truth.

In a May 26, 1991, issue of the Tropic Magazine, Dr. Pedro Joe Greer tells a story.  At the time, he was the director of the Camillus Health Concern for the homeless.  I love this story because I think it is something every medical and alternative therapy practitioner needs to hear.  It sums up how we are blinded by healing paradigms.  (Source:  Tropic, Page 3, May 26, 1991, in an article by Tom Shroder).

There’s a river, and a doctor standing at the edge.  A body floats by, so the doctor drags the man out and resuscitates him.  Then ten bodies float by, so he gets another doctor to help resuscitate all ten.  Then 100 bodies float past.  So the doctors build a clinic.  Then 1,000 bodies appear, so they get state funding for a community hospital.  Then 10,000, and the federal government builds a regional medical center.  All this time, everyone has so frantically been reviving bodies that nobody has asked the most important question.  Why are so many people falling off the bridge?  (Source:  Tropic, Page 3, May 26, 1991 in an article by Tom Shroder with story by Dr. Pedro Joe Greer).

Ask the important questions so we are not blinded by healing paradigms.  May we see beyond the current moment and see the bigger picture.  For when we do, we may be treating someone as a whole person, not just a symptom that we know how to treat.

For More On Blinded By Healing Paradigms

Are Genuine Friends What They Used To Be?