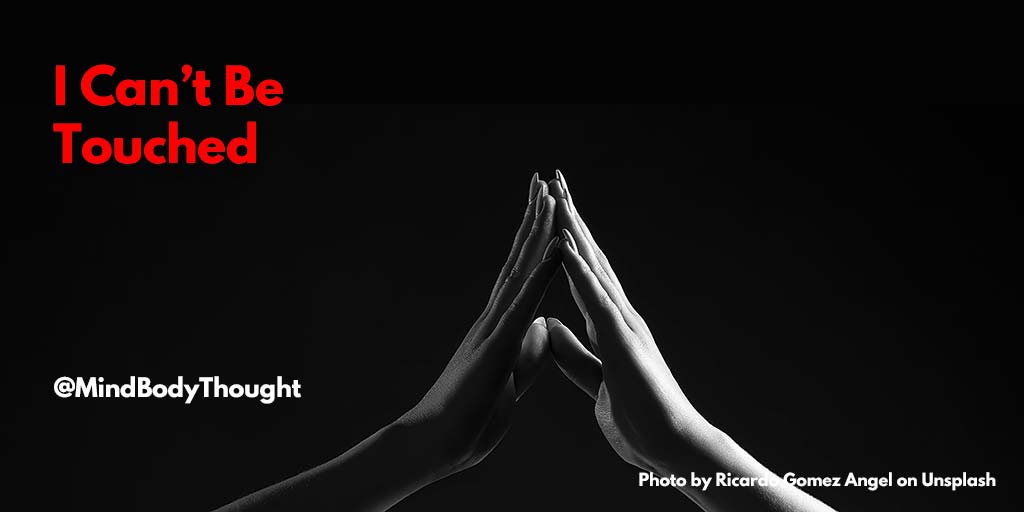 I Can’t Be Touched

Don Shetterly 0 July 24, 2019 12:02 am
Dealing With Our Insecurities
Is Emotion The Enemy?
Reclaiming Painful Parts Of Life

Some days I struggle and I can’t be touched. Yesterday I had one of those moments in bodywork where touch was not easy. That may sound odd to say, but I’ve gone through this on more than one occasion.

If you have read my book, you’ll more fully understand the physical, sexual, mental, and emotional trauma I went through in life. My body hunkered down avoiding the next horror moment of physical contact in one form or another.

Triggered By My First Massage

I remember when I tried to go from no touch to a massage when I was in my early days of counseling. I talked to my therapist and she was behind me 100% in this endeavor. So, I went in for the massage and the massage therapist was great, comforting, and so nice.

Everything was going fine until she got to my back. It all felt good, but all of a sudden my body went into the mode of “I can’t be touched.”

I’m not sure why the part in my back did that, but it did.

While I wasn’t able to say what was going on and I had no way to deal with the trigger, I ran out of there as fast as I could.

Consequently, I did not go back.

I couldn’t speak about it. There was no comprehension that I had been triggered. To me, it felt like the touch had gone wrong. So, my first experience with massage resulted in feeling like I can’t be touched.

Fast forward many years. My mom had passed away, which was one of those life-changing moments. For some reason I started to look at healing modalities and I chose to become a massage therapist. I remember having a professional massage just to see if I could do that, since I knew how I struggled and felt I can’t be touched.

In the massage classes we did frequent work on each other. It was how we learned. We were supposed to be giving feedback and most of my feedback in those days was “it didn’t feel bad.” That was my barometer to touch. It was how the concept I struggled with of “I can’t be touched” came out. I had no other way to verbalize it. I was too afraid to verbalize or connect with the touch in my body.

At massage school I did well. However, I was not really feeling and sensing like I needed to do. Then, I took a class in Trager and that’s when this really started to change. I began to feel so much more in my hands than I had ever felt in the first third of my life.

As I started to give massages to others, I encountered so many that would say, “I can’t be touched.”

It is more common than anyone realizes.

I Can’t Be Touched – Domestic Violence

I worked in a domestic violence services place and will never forget the lady that got under the sheet, fully clothed, on my massage table. Now, I recognized in her the same thing that I struggled with in my life. I worked on her that night as I would with any other client, but safely touching her through her clothes. She beamed with joy when we were finished and came back often. We turned “I can’t be touched” into a moment that allowed her something different.

One time I went to a conference for sexual abuse survivors and did chair massage on anyone that wanted it. I’ll never forget one lady that came up to me. She was so scared of being touched that she could hardly communicate with me. I reached out to her through compassion. She was afraid of sitting down in the chair and being touched.

I told her that we could stop at any time, if she wanted to try it. I would do nothing until I got her permission to touch. As I began to just lay my hands on her shoulders (the part that felt safe) and that’s all I did. To me, it wasn’t much. To her, it was the world. The next morning she was beaming with joy and said, “I slept so well. You helped me so much!” Yet, I really did little work at all. We turned “I can’t be touched” into a moment that was life-changing.

There was one time I was in a bodywork session with Dr. Canali. While I trusted his touch, it was a moment where I said, “I can’t be touched.”

Imagine going into a bodywork therapy session and being so afraid of touch that it makes it almost impossible. Yet, Dr. Canali helped me walk through that moment, only touching places that were safe, and only with my permission. He worked on me to help verbalize it even if I wasn’t sure how to state it. Those moments helped me move through that.

Personally Struggle To Be Touched

I struggle personally with touch. Sometimes I can’t be touched by anyone other than my cats. Hugs are not always safe and to those that think they can hug anyone, please think twice. For a person that is afraid of hugs and being touched, it is not always a good thing.

Sometimes I struggle with crowds of people because of those that bump into you. The touch will raise the anxiety in me quickly. I can’t easily deal with my personal space being invaded and am very guarded when out in public.

In my relationship there have been some horrendous times when I could not be touched. I’ve been struggling through one of those points lately. Early on, I would almost vomit if touched or hugged. With some skin issues I had recently, there was nothing on my body that wanted any touch. It was strictly a moment of me saying, “I can’t be touched.”

As I went into a bodywork therapy session yesterday, I struggled to want to be touched. My body cringed and sunk internally to avoid it. No human contact felt safe or good or desired, no matter how well-intentioned and safe the person was.

I Can’t Be Touched – Lonely And Painful

All I could say was “I can’t be touched” and if you think that is easy to deal with, I can tell you it hurts like hell. Imagine wanting people to care but you hold them back. Imagine wanting someone to hold you, touch you, or hug you, but touch was horrifying. Even with all the therapy I’ve been through, I still struggle with these moments. They hurt deeply because I feel like I’m on the outside looking in, wanting touch.

If you’re one of those people that say, “I can’t be touched,” I do feel for you. I know how difficult that is and how horrifying the thought of touch can be. Yet, I know that if I can work through it, touch is such an essential component of life and my healing that helps me greatly.

Some modalities that help are ones that are not traditional massage. They include (but are not limited to) the following

These are all things that can help take you from the point of “I can’t be touched” to finding a way to heal.

You have to take these issues slowly. If you try to jump into regular body massage, it will most likely trigger you. If you’re not prepared to deal with triggers, it can be re-traumatizing. This will only set you back in your healing journey. You need to make sure that whomever you see understands triggers and re-traumatization.

Not Overwhelmed By Bodywork Therapy

Another thing to keep in mind is that you want someone who can take you in and feel what is going on inside, while working with you to verbalize it. Once again, not to the point of overwhelm Also, you’re not trying to tell a story. You are just trying to verbalize how you feel and what emotions are coming up. Yes, a story may appear, but it is definitely NOT the intent of this concept. The story can get in the way because you want to feel and connect to those emotions without re-traumatizing yourself.

Additionally, you need to get to the point in a session where you reach that deeper peace. Now, I know many will claim they know what peace feels like, but after you’ve gone into a bit of the difficult barriers and reached below them, the peace will be different than anything you have ever experienced. It is important to reach that deep peace. Otherwise the body questions why you are doing this and it will rebel against you in the future.

Being Touched Can Change

Fortunately I’ve found Dr. Paul Canali and Jim Fazio to help me, and each is one of a kind. I really know of no one else that I could go to in this situation. Others may be out there, but I have not met them in all my years of doing this work.

Hopefully, this helps you if you are one of those that say, “I can’t be touched.”

I know firsthand what that feels like and how lonely it can be. I know without a doubt how challenging it can be to find the right person and go through this part of healing.

Yet, I know it is possible. Check out my book, Overcoming A Mysterious Condition to find out more.