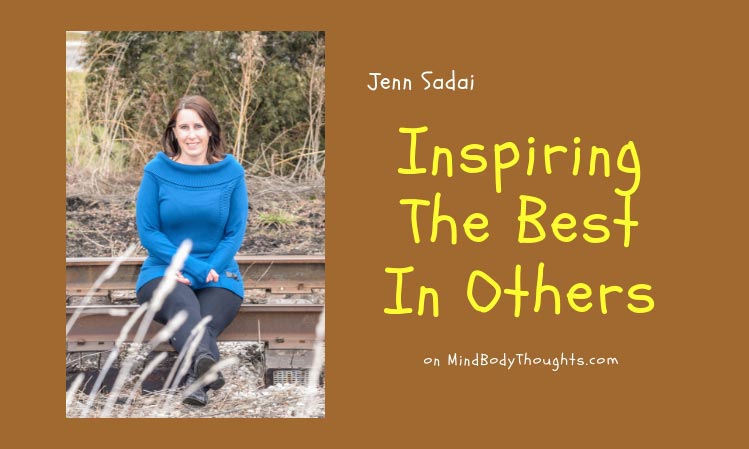 Inspiring The Best In Others

Guest Writer Mind Body Thoughts 0 September 24, 2018 12:02 am
I Forgot To Ask A Question
Why We Can’t Manifest For Others
What Your ADHD Child Wishes You Knew Book Review

Inspiring the best in others is a guest submission by Jenn Sadai.

My story starts with a less than perfect childhood that led to a far from perfect romance.  I was 17 when I met my first boyfriend.  We both made a lot of mistakes in our past and were committed to creating a better life together.

My ex was a sweetheart for the first two years until his own life started to spiral out of control.  His best friend shot himself and then his girlfriend.  A close cousin committed suicide and then two years later, after finally reconnecting with his father, his dad overdosed while in rehab.  He went from a troubled teen trying to be a better man to a broken soul angry with the world.

The man I wanted to marry turned to hardcore drugs, became verbally abusive at first, then physically abusive.  I loved him and thought it was my responsibility to put his life back together.  I tried to get him help.  Nothing seemed to work and the abuse only got worse.

He started stealing from me.  He cheated on me, although I didn’t find out until after I finally left him.  Then another one of his friends died suddenly.  The abuse went from squeezing my arm or throwing things at me, to trying to smother me in my sleep.  After a drunk and possibly drug-induced evening with friends, he jumped on top of me and put a pillow over my face.  He was trying to kill me.

Inspiring The Best In Others – I Fought Him Off

I’m proud to say I fought him off.  I kneed him where it counts and was able to push him off of me.  Kicking and screaming, I forced him outside our bedroom.  I shut the door and moved our dresser in front of it, so he couldn’t get back inside the room.

I’m not proud to admit the next part that I stayed with him for another three months.  I insisted that I wouldn’t put up with any more, but I did.  I was miserable, constantly smoking marijuana to escape reality, and depressed to the extent I contemplated suicide.

It was my ex who finally set me free.  The morning after another ugly, physical fight, he had a moment of and said I needed to leave him before he ended up killing me.  He was right, but I needed him to release me from being responsible for his wellbeing.

Inspiring The Best In Others – My Weight Loss

A few months after leaving him, something unexpected happened.  I lost 50lbs in 6 weeks.  I gained about 50lbs in the last few years of our relationship because I was trying to eat my problems and was close to 200lbs.  My weight played a big role in my low self-esteem.

Now, I was single and skinny!  My ex had made me feel horrible about my weight and I suddenly had this awesome body that I could rub in his face.  He wanted me back, but I was finally starting to see that I deserved better.  Regaining my self-esteem and self-worth was a long process.

Inspiring The Best In Others – The Wake-Up Call

Although the shape of my body had improved, I was not healthy.  My heart would race out of control for no reason and I felt like I was spinning. I was not sleeping.  I talked fast, walked fast and my eyes were bulging from my face, yet I ignored it for months.

I didn’t want a doctor fixing my miracle weight loss.  While I know it’s vain, it took losing chunks of my hair, before I finally saw a doctor.  There was a noticeable bald spot and despite the massive chest pains I was ignoring, the hair loss was the deciding factor.  I had hyperthyroid and since I ignored it for nearly six months, it escalated to Graves disease.  I was 24 years old, wasting away to almost skeleton status and at risk of heart failure.

Wake up call!  It was a wake call, but I hit snooze for the next few years.  I took the medication, was in remission, and slowly put my life back together.  I found a better job, met a kind-hearted man, and was happily married three years later.  My husband’s a keeper, but I still wasn’t the happy person I am today.  I gained back the weight I lost when I was sick. My insecurities were constantly getting the better of me and I went from a toxic romantic relationship to being a victim of a workplace bully.  I put up with it because I still didn’t realize I deserved better.

Inspiring The Best In Others – By A Friend

Everything changed just before I turned 30.  A close friend was showing off her marathon medal and it inspired me.  She was beaming with pride and I wanted that same feeling. I was an overweight smoker at the time and didn’t think it was possible.  Fortunately, my friend believed in me more than I believed in myself and helped me train.

I finished my first half marathon in 2009.  I’ve finished two full marathons and 6th half marathons since then.  Each time I cross the finish line, my confidence grows and I feel like I can do anything.  I was healthy and confident, but working a chaotic job that consumed me.

The job I had was a food and beverage manager of a golf course.  I hadn’t had a day off in two weeks and booked off a Sunday for a cousin’s baby shower.  Due to all the hours, I was working and the crazy weekend/holiday schedule, I barely saw my extended family.

Inspiring The Best In Others – My Uncle

When I got to the hall, my sister-in-law was standing outside, waiting for me.  That day changed everything.  An uncle I was close to was diagnosed with leukemia.  He was only 50 years old and in top physical condition prior to the cancer.

I rushed to the hospital to see how he was handling the news, but that selfless man kept asking about me.  Eventually, I vented about work and he asked “Why are you a Food & Beverage manager, when you were meant to be a writer?”

I quit my job the next day and started writing.  Five years and five books later and I’m finally living the life I deserve.  There’s a quote in my first book that I repeat to myself often.

Inspiring The Best In Others – My Life Was Valuable

“Once I realized my life was valuable, I started to treat it that way.”

I make better decisions now, because I realized that my health and happiness matters.  I also learned that everyone faces challenges. It’s how we respond that matters.

When my ex’s life fell apart, he went down with it and tried to take me down as well.  When my uncle was at death’s door, he used it to inspire the best in me.  That’s how I want to be.  I have the ability to turn my tragedies into triumphs and carry on my uncle’s legacy.  I’m now a strong survivor who’s using her story to help others.