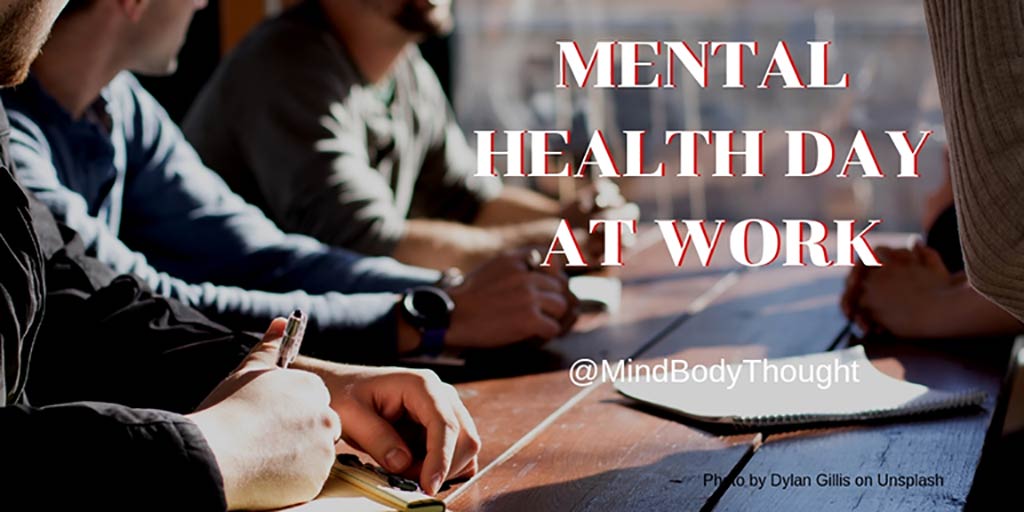 Taking a mental health day at work is sometimes one of the best things any of us can do.  Fortunately, right now, I work from home and I set my own hours.  So, having to beg a boss to let me stay home is not an issue right now.

However, not long ago, it was!

In one job, in particular, I really didn’t like the place I worked.  It was an international company and the owner as well as many of the employees despised those of us from this country.  More than once I heard that “we were inferior” and it always bugged me because I don’t care where you are from or what you look like.  We all have our strengths and weaknesses.  Should I note that the owner ran the company into the ground because he thought money grew on trees?

I Needed A Mental Health Day At Work

So, this job was very stressful and I was trying to go to school full time at night.  It was a toxic environment.  At the time, there were not many jobs available in my field so I had to put up with it.  I recall knowing exactly how many hours I had in my “vacation days bank.”  With email, it was a little easier to fake the illness, but instead of being physically sick, I just needed a mental health day at work.  Yes, I lied.  Yes, I was careful to not get caught.

However, I wonder why any of us with difficulties in life should have to lie.  It should be as accepted as half of the excuses many other people use.  No, I didn’t have kids so those type of excuses others used, didn’t work for me.

I’ll never forget after I came back to work in a normal routine from conversion disorder.  It took a lot out of me to function.  I constantly dealt with anxiety, sleepless nights, depression, headaches, and a nervous stomach.  I was dealing with nightmares and difficult family situations as well as triggers and emotional turmoil.  It was not easy.  For some time, I was traveling to a distant city for mental health counseling.  My boss, Ron, thought that this was a waste of time.  No, I’m not going to include his last name because that would give his ego to much credit.

This Will Shock You!

What did he do?  This may shock you to no end, but he told me I could always just talk to him.  I didn’t need to run over once a week for this.  Now, keep in mind, I put in far more than 40 hours a week into this job, even with going to counseling.  He selflessly (I’m stating that sarcastically) told me I could share any problems with him that I was having.  I politely declined this option.  After all, I doubt he was qualified to deal with the stuff I was living through in my life – healing from being a survivor of child abuse.

More importantly, though, there was no way I was going to tell my boss, some of the most intimate moments and struggles of my life.  Talk about a boundary violation!  At the time, I wondered if Ron really thought I was that stupid to take him up on his offer or he was that ignorant.

Sometimes we all struggle through difficult moments in life.  For those that struggle with depression and anxiety and other things, work and life are not easy.  We put the brave face on and head out the door, but then when the day is done, we collapse at home.  I remember struggling so hard to get through a day at work.  Sometimes it was a distraction and other times, I’d go out to my car at lunch and cry my eyes out.

Taking a mental health day at work should just be the norm in my view.  Sometimes all of us need that and some of us need it more than others.  It is not a sign of weakness to me.  Instead, it is a sign that I’m taking care of myself so I can do my job to the best of my ability.

I’ve seen countless times too where a company claims to be okay with taking a mental health day at work only to use it as a weapon against you in the future.  Many companies and bosses say one thing, but just as the article, I Took A Mental Health Day At Work And Lied About It, I read today points out that bosses are not as supportive as they think they are.

We Need To Do Better

This is no way to live life though in corporate America.  I believe we kill ourselves every day in jobs and we don’t take care of ourselves in the way we should.  Corporate America doesn’t care about the individual.  They only care about what the profits are and how much the shareholders love them or don’t.  To take a mental health day at work is like asking for a raise in a job.  Both are going to get laughed at and dismissed.

Wouldn’t it be nice if we valued people in jobs as much as we claim we do?  It might just make for a better life, but then I must once again be dreaming.

I Took A Mental Health Day At Work And Lied About It. Here’s Why. – HuffPost https://t.co/1NF7UYlCUh