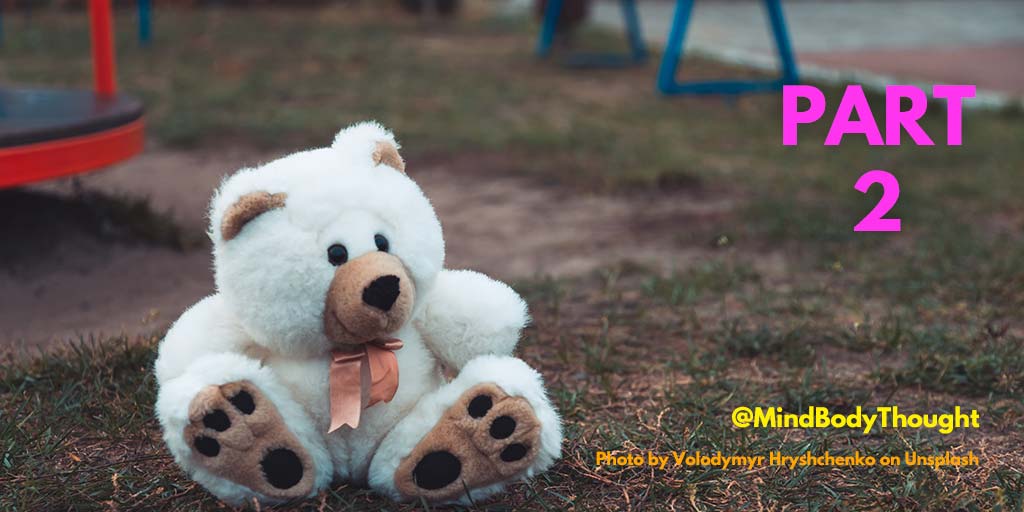 For me, hugs, emotion, and affection were shown in strange ways. Lines were so blurred that it was hard to know where boundaries were. I remember getting some hugs from my dad, but they were few and far between.

Often they led to an icky feeling and boundary-crossing. Many times they would be a lead up to a sexual encounter. You were never sure of what the hug was supposed to do as it felt like ulterior motives waiting to unfold.

If you talked to my dad, he would make fun of me if he heard me say that I felt like he held back hugs and affection. In fact, I remember him writing a letter to me mocking that I even raised the issue.

Of course, he never listened. He would mock you if it was anything that wasn’t praising him or glorifying how great he was.

My mom on the other hand would hug me and show affection. She had a sensitive side and so it was much easier to connect with her. I didn’t have to wonder when she showed me affection or gave me a hug like I did with my father.

As I got into my teenage years, hugs became much more difficult for me to accept. I would cringe or jump at the slightest touch by anyone, including my mom. Nothing felt safe. So many people in this day and age think it is totally acceptable to walk up to someone unannounced and give them a hug. For people like me, it is a nightmare of anxiety.

The physical boundaries in all of this make it hard for me to want to be touched at times. I crave it and often despise it at the same time. It is very difficult to this day for me to reconcile the two points. In addition to all the other stuff that happened to me, my body just doesn’t easily trust physical touch. Few people fully understand this.

Emotion, in addition to hugs and affection, was something I did not often see from my dad.  I rarely saw him cry or show deep feelings.  Yes, he easily showed anger and rage, but his range of emotions didn’t go far beyond that point.

His father wasn’t any different, from what I could see.  I have no idea what happened a long time ago in that family, but emotions were not something they displayed.  The last image I have of my grandfather (my dad’s father) is him lying on a hospital bed with a newspaper held over his face.  He wouldn’t even look at me to say goodbye, and we were getting ready to drive 1400 miles back to our home.  If he had emotion at that time, he never showed it.

I remember when we visited my grandparents, which was rare, my grandfather would be watching cartoons on TV while sipping a beer.  I think I saw them three times in my life that I can recall.  He offered no affection and showed no emotion.  It was all spent on TV and beer.

My grandmother, on the other hand, was a warm and caring lady.  I loved being around her, and she made me feel wanted and appreciated.  She was the opposite of my grandfather.

Much like my parents, my mom was emotional, warm, and caring while my dad was one that had no emotion and showed little affection.  Of course, when I was brave enough to point this out after being in the hospital, he got quite angry at me.  He claimed the psychiatrists brainwashed me into feeling sorry for myself and blaming my parents for not giving the love and affection I needed.

It was true that none of us got the love and affection we needed.  If you compared us to some other abused kids or ones in an orphanage, I guess we fared better.  Maybe that isn’t saying much, but the bottom line, regardless if anyone in my family wants to agree with me, is that emotion and affection were something you rarely ever got.

Additionally, even if you were shown affection and emotion, it was often something you earned or had to earn.  There were always strings attached, even if they were not consciously stated at that moment.  If you did something wrong, no matter how minor of an infraction it was, it was not uncommon to hear “you’ll need to earn back our trust or love.”  How can a parent say that to a child?  Aren’t love and affection things you freely give?  The obvious answer is NO!

I see so much of this same behavior in our judgmental society, even though people proclaim they don’t do that.  Yes, I’m very sensitive to this because of what I went through, but in our society we often say the words we love someone, but we don’t follow it up with actions the way we lead ourselves to believe that we do.

Part 3: Father Was In Poor Health