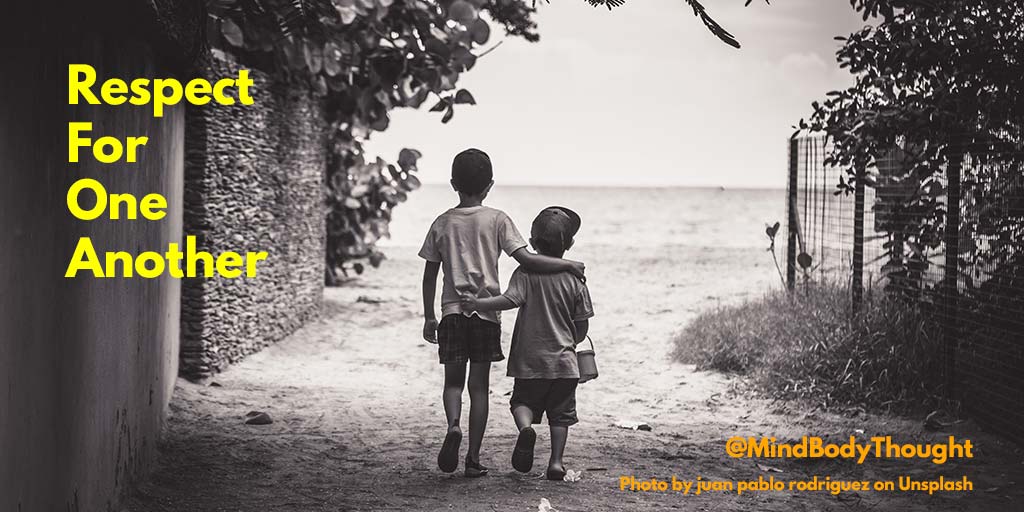 Respect For One Another

Have we all lost respect for one another? I’m not talking about other people that we think do this. I’m talking about each one of us.

Have we lost all respect for one another?
We need to find a way to respect one another as we once did.
Beliefs And Opinions Become Fact
What we proclaim on social media needs to be authentic. Authenticity is missing these days.

Lately, I see people preaching love and acceptance, tolerance, and working together, but these become mere words. When you look at the actions, retweets, replies, likes, and shares, the words are hollow.

More and more I see a civilization that is becoming increasingly hostile toward others. There is no respect for one another.

Many despise the lack of respect, but then go on to do that which they abhor. They do the very same thing that they scream out against.

Yes, I know times are stressful. I know there’s a lot of stuff in the media and online that is not helpful to the human population or the continuation of this planet. However, if we do that which we hate, are we any better?

Have we lost all respect for one another?

If we can’t respect all and love no matter who they are, then how can we expect to change their mind or convince them we have something to offer? If you’re hating another person, they sure aren’t going to be receptive.

When you lecture others and do it disrespectfully as if they are stupid, you might as well stop there. Your point is not going to be heard, nor should it be. If you want the same respect back, then you need to give it, regardless of what the other person does or does not do.

We are all part of the problem right now. We need to learn once again how to have respect for one another.

I know there are days when I really want to let the fingers fly on my computer keyboard. Yet I know that if I do this, I’m just another voice screaming in the crowd. No one would hear me because my screaming would become one of many.

We all have to find a different way to respond to others. What we are doing is not working. It is not helping.

We need to find a way to respect one another as we once did.

When we consume the negative-based news that we are so disgusted by, we do nothing but feed our souls with garbage. When we engage in behavior online that is the opposite of what we want to see, we are not helping anyone in the least bit.

If we pass on and share the stuff that we abhor, what are we really doing? I would argue for the sake of discussion that we’re feeding the problem. We are not helping anything.

Respect for one another means so much more than we are displaying these days, especially online.

When we think we’ve got all the answers and anyone that dares suggest something different is viewed as wrong, we’re the problem. I don’t care how much you studied or what degree you hold. Learning should be the norm, not the exception.

I see far too many so dead set in their beliefs and opinions, that they have become fact. There may be little to back up what they believe and feel is right, but now there is no room for anything different. Their feet have been dug into the dirt like a stubborn mule who won’t move forward to the drinking water.

If we don’t start reversing what is going on in this world, I’m afraid we will get to a point of no return. We will get to a point where respect for one another is something that’s discarded. We’re heading over the cliff and yet no one seems to notice. Everyone is blindly running with the herd.

No, I don’t have all the answers either. I’m struggling right alongside many who are bewildered by what is happening. It is sad. It is horrible and frightening.

Our words and actions need to match.

What we proclaim on social media needs to be authentic. Authenticity is missing these days.

I have said before that if your last tweet or social media share was engraved on your tombstone, would that be what you would want others to remember you by for centuries to come? Would you want a newborn baby to only know that one thing about you?

Respect for one another isn’t just a meme that we share. It is part of who we are. If we don’t figure this out, there may not be anything left of our civilization on this planet. It may be too late.

Respect is not something automatically given. In order to get respect, you must respect others. Make sure when you say you respect others, that it is easily seen in your actions and words.

Have we lost all respect for one another?
We need to find a way to respect one another as we once did.
Beliefs And Opinions Become Fact
What we proclaim on social media needs to be authentic. Authenticity is missing these days.