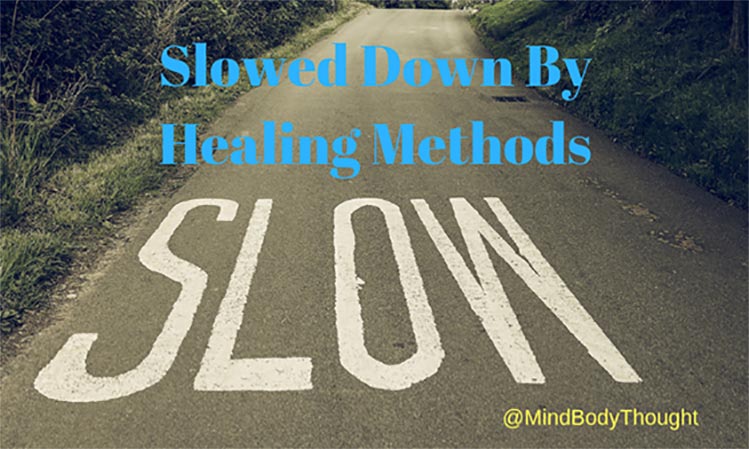 Slowed Down By Healing Methods

Don Shetterly 0 November 7, 2018 12:02 pm
Finding Answers In Healing
Life’s Experiences As My Teacher
Get Out Of Your Head

Are you slowed down by healing methods that you use?

Many years ago when I was struggling with conversion disorder, there was no clear path to my recovery.  I was barely able to move or function.  Many in the medical group working with me told me it would be some time if I ever worked again.  There was no guarantee that I would work again.  The odds were stacked against me.

Told I’d Be On Medication Most Of My Life

I was told that I would be on medication most of my life and the odds of me resuming a normal schedule were very low. At the time, I hated to hear this, but I think it brought out the inner fighter in me. No way was I going to allow anything to hold me back in my life. After all, I was 26 years old.

There was no clear path to healing, but I trudged on trying to figure out what worked and what did not. I made major progress and was soon back to work full days. Yes, I still had issues to deal with, but I was not about to be slowed down by healing methods I used.

With knees shaking and my body trembling, feeling like I was going to pass out from yet another anxiety attack, I pushed forward.

I never thought I would make it and some days I didn’t care if I made it. No matter what, I was not about to be slowed down by healing methods.

I looked for things that worked and tried to discard those that did not. Reaching outside of the paradigm box, I created moments that were not easy, but very healing.

One friend of mine told me one day that he was doing all these different therapy methods every week but it didn’t seem like they were working. He was slowed down by healing methods. I told him he might want to consider finding something that would help. As he gasped at me in anger and disbelief, he continued doing that which he claimed was not helping.

I Had Been Slowed Down By Healing Methods I Used

By the time I reached Dr. Paul Canali, I felt like I knew a lot and had healed myself so much. When I started in treatment with him, it was then that I found out I had been slowed down by healing methods I was using. If I had hung on to what I knew, I would not have found the level of deep healing that was waiting for me.