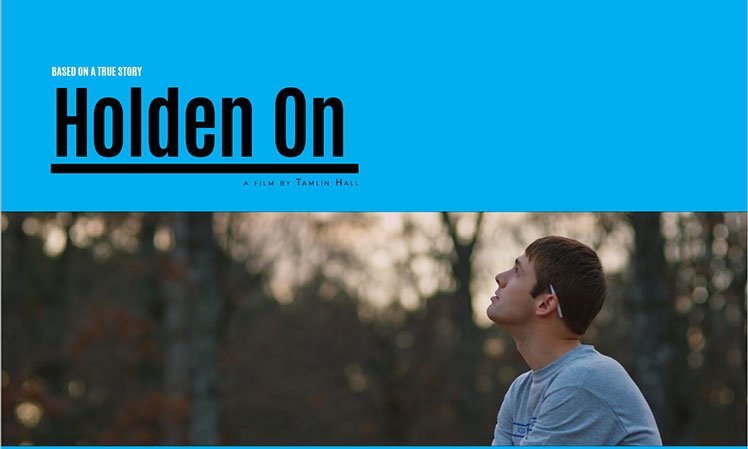 When I went to the Orlando Film Festival, I didn’t expect my life to be forever changed because of a movie. Holden On, produced by Tamlin Hall, was that movie!  It is a powerful film about dealing with mental health and mental illness.

We had been to the Orlando Film Festival the previous year and loved the time we spent. My friend Jeff had helped with a movie called The Record Man, so we were able to go and see it. As a result, we discovered that film festivals were fun to attend!

As with the previous year, when we went to the Orlando Film Festival, we had no set agenda. We read about Holden On, and figured it would be a good one to see. Because of some scheduling snafus, we thought we had missed the movie, but on the way out of the theater, there was the producer, Tamlin Hall. He found out that the previous film was just running over, and that connection made all the difference.

Tamlin was such a warm person, and I instantly felt connected to Holden On, even though I had not seen it yet.

As the movie played, I found myself drawn into it in a way that is hard to describe. I felt like I was Holden in many ways and Holden was me. I felt the despair, anxiety, and depression. The movie touched me deep to the core. It moved me. It blew me away. As I told Tamlin in an email, “the movie was so effective and powerful and intense.”

When it was over, Tamlin hung around for questions. I remember him saying that hugs were free. By that point, I had been crying so hard because of how the movie resonated with me in my own life. Normally, I don’t let people I barely know get close to me, but in this case, I allowed Tamlin to come up and give me a hug.

I could not stop crying that day. It was such an emotional film, and it moved me so hard that I wanted to sit down and have a discussion with Tamlin. If you have not had a chance to see it, I hope you check it out at an upcoming film festival. Learn more about the movie by going to the website.

If you live in San Francisco, you can see it on February 4 and February 6 at the SF IndieFest. It is a must-see movie, so if you live close to there, make sure you go and check it out.

Here’s a quick synopsis of the film:

A timeless tale of a 17-year-old, Holden Layfield, who fights to keep his mental illness a secret at all costs. No longer your average boy-next-door, Holden Layfield weaves audiences through his harrowing tale in this film set in the early 1990’s. After succumbing to a secret battle with mental illness, Holden evolves from a beloved, small-town Georgia football player to a lost, self-medicating prophet.

Without further delay, let’s head right into the interview on the movie Holden On, with Tamlin Hall.

Don: Thank you, Tamlin, for taking time out of your busy schedule to sit down with me in this interview. I know you’ve been busy in your personal life, but also in getting this film into all the film festivals. I feel honored to be here with you today.

Tamlin: Thank you, Don, for the opportunity.

Don: What got you interested in doing this movie, Holden On? 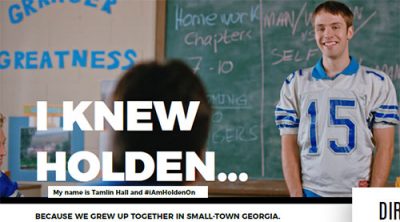 Tamlin: I knew Holden, the protagonist in the story, in real life. Growing up in small-town Georgia, you basically know everyone in your town. Holden was a couple of years older than me. I knew his family fairly well. We were friends but not that close.

I was very overweight as a teen and Holden was one of the only students at my school who did not bully me. He would say hello, offer me rides home from school and tell me jokes. He treated me like I belonged in the world. Holden had more humanity than any other teenager in our community. I admired him, and I looked up to him.

His humanity shined brighter than anyone else’s during those tough teenage years. I originally became interested in telling Holden’s story because I was watching a lot of news and media cover individuals living with a mental illness in a dark and violent manner. I thought Holden and his story could provide a meaningful and compassionate story not often seen in the news and media.

Don: Considering the subject matter, did you encounter any resistance in getting the film made? 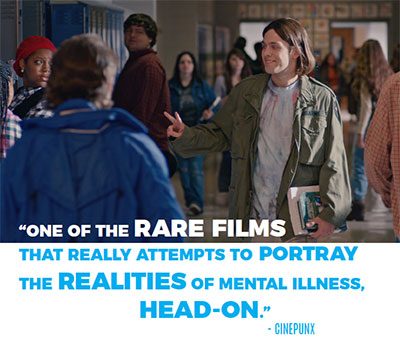 Tamlin: Yes. Our film deals with mental illness, substance abuse, and suicide. Alone, these subjects are difficult to discuss. Tackling all three in one film… we knew it was going to be a challenge. As a filmmaker, I had an unconditional amount of love for this material. I knew my personal interest in this story would convey an honesty and truth about this subject matter that would highlight humanity in an authentic and unique way. So, to answer your question… we didn’t listen to the resistance because we believed in Holden On.

Don: How has the movie impacted your life?

Tamlin: This movie has been a part of my life for a decade now. Basically, Holden On has shaped me as an artist and as an adult. Holden On is me. I’ve met some of the most special and important people in my life through this project: cast, crew, family, audiences, teens, parents, suicide survivors, mental health providers, mental health professionals, volunteers, teachers, counselors, young artists… it’s been a once-in-a-lifetime journey.

Don: What have you learned from doing this movie that you did not realize before you started it?

Tamlin: You can read a statistic like 1 in 4 individuals affected by a mental illness can’t “feel” it. It wasn’t until I went grassroots across this country that I began to realize how many of us are personally affected by mental health and suicide. I can feel that now, and can feel the need for humanity. I can feel the need for acceptance and compassion. Also the need for generosity… that’s why we do something as simple as giving hugs everywhere we go. It’s our duty to let others know that they are not alone.

Don: You’ve won several awards, including best director, at a good number of film festivals. With all this success, is there any chance of a wider distribution (Netflix, Hulu, Amazon, etc.)? 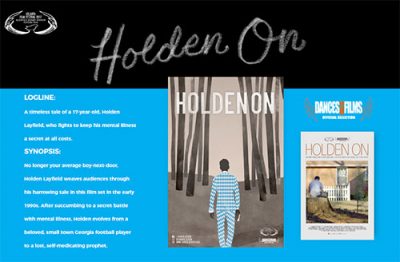 Tamlin: We’re setting up a “Keep Holden On Tour” next year in 2018 where we continue our grassroots movement throughout communities and towns across America. It’s our goal to that our tour will spark a larger cause-based movement for additional educational and community screenings of Holden On through our nonprofit IAMHOLDENON. The “Keep Holden On Tour” will be our lead-in for a worldwide release of Holden On on major a platform like Netflix, Hulu or Amazon. We are currently looking for a distribution company to partner with us on this grassroots, community-based roll-out.

Don: Holden’s story is now taking you beyond this film. Can you tell us some of your plans for the community outreach program?

Tamlin: We have formed a nonprofit, IAMHOLDENON, that plans to build evidence-based curriculum/toolkits for teens, parents, teachers, and communities to better discuss mental health and suicide. The curriculum will be provided prior to screening Holden On. IAMHOLDENON is built on the belief that we can change the social landscape surrounding mental health as well as lower teen suicide rates through arts and humanities. Other upcoming outreach programs for the nonprofit will be our Camp IAMHOLDENON for teachers and an annual IAMHOLDENON Music & Arts Festival.

Don: How has the film helped in bringing teachers, youth leaders, and students together?

Tamlin: You could talk to our teacher liaison and Vice Chair of IAMHOLDENON, Morgan Melton. She teaches in Colorado Springs, CO, and uses IAMHOLDENON in her classroom. It’s rejuvenated her passion for teaching and relationships with her students. Recently, there was a Holden On screening where one of her prior students was in attendance. The student revealed to Morgan for the first time how alone he felt during high school. Depression and getting bullied caused him to have suicidal thoughts. Then, he told Morgan that IAMHOLDENON saved his life.

Don: Thank you so much for spending the time with me today. I hope that more people see this film as a result. We need these discussions about mental health issues to take place, and we need others to know they aren’t alone. There are others out there struggling too and together we can help one another.  Make sure you check out the link to the website and the movie!

More About Holden On And Mental Health Issues

Holden On At SF Indie Fest 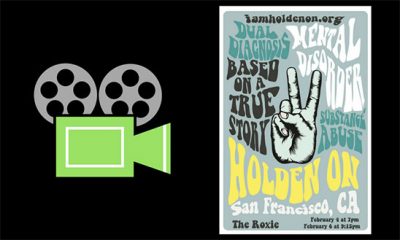