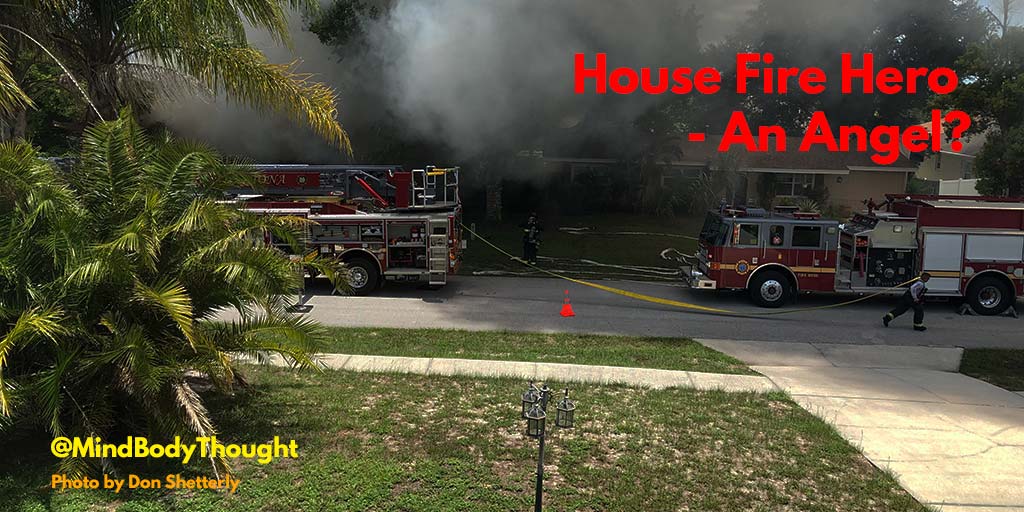 Was The House Fire Hero Actually An Angel

I’m going to tell you about a house fire hero and why I believe he was an angel. You may draw a different conclusion, but then without being there, it may be hard for anyone to understand what I saw.

I have not written about this publicly because I wasn’t sure how it would be taken. The last thing I wanted was to be laughed at or ridiculed. However, after a recent therapy session, I believe it is time for me to share the story.

The day I saw the angel in the house fire started out like any other, but that was about to change. When I saw the flames coming from the house, I knew two ladies lived there. One was very elderly and didn’t walk too good. The other walks, but not great and is the caretaker.

I Ran Out The Door To Help

I was worried about them and ran out the door to see if I could help. The flames were bad at that point and things were popping and blowing up.

There was no one in sight. There was just a house engulfed in bright orange flames, and smoke billowing out from the roof. Their dogs were nowhere to be seen.

The first firetruck pulled up and I knew it was best to let them do their thing and so I backed away. It was dangerous because stuff was exploding, and one piece flew right over my head and landed behind me. One firetruck had a lot of damage on the its side because of objects hitting it.

A fireman later told me the popping noises were coming from LP gas tanks, small gas cans, and aerosol cans blowing up, among other things.

I Didn’t See Anyone Come Out Of The House

I didn’t see anyone come out of the house, but suddenly this tall strong-looking guy with jeans and a t-shirt and cap came walking toward me. Who was he? Was he an angel?

There is a palm tree and a brick-raised garden in our front yard. I had just looked in that direction moments before and no one was present. The firemen were busy working to put out the fire.

It was then that I saw the two ladies sitting where he had brought them, on the little rock-ledge garden.

While they had him calling someone on their cell phone, I put my hands on them and said, “I’m so sorry. I’m so sorry.” I asked them if they wanted water and when they said yes, I ran into the house to get some. Both ladies were stunned and in shock.

Calmness Of The Angel

At that moment, I felt the guy look at me and it was almost as if he was giving me strength energetically. I was about overcome with emotion and his strength helped me keep going. His calmness was unlike anything I have ever experienced. I felt totally safe with him.

The guy wanted to know if I could get a couple of chairs and seemed to know that we had some right through the yard gate. That caught me as odd because no one would know that. They are out of sight because of our fence.

I ran and got the chairs. Jeff followed right behind me to help, and normally I would have had to explain more about what we needed to get. He just seemed to know and follow my lead.

Peace And Calmness Of An Angel

During this time, I felt such peace and calmness around this guy. It was just a sense and a knowing and a feeling. I was getting teary-eyed at the thought of these ladies watching their house burn, and he seemed to give me strength. They had told me that their two dogs didn’t make it out and that was tough for me to hear (tough for them too).

While on our way up the hill in our yard, the younger lady looked at me and said I feel like we are enemies. A couple of years earlier, she had driven crazily through our yard and I was afraid of damage being done. I got angry. Yes, I do have a temper.

When she said she felt like we were enemies, I told her “No, that is all behind us. All is forgiven and all is forgotten”. What she said to me melted my heart that day.

We got them into the chairs and the paramedics had arrived by that time. The guy walked away down the street next to the firetrucks and disappeared. He vanished as quickly as I saw him. When we looked back on our Ring video, we could see him, so I know he really was there.

News Crews Looking For The Unknown Person Who Helped

News crews were coming around trying to find the “unknown person” they had been hearing about who helped rescue the two ladies out of the house. The more I write this, the more I realize it was an angel that was there and rescued these ladies that I interacted with that day.

He had such a calm and peaceful presence that you could feel and sense. I don’t know how else to describe it.

During the time I was initially with the angel, I heard him say to me, “you have the strength to help them.” At first, it was comforting to me. I figured it was meant for these ladies.

However, in a recent therapy session that I’ll post about on October 9, 2019, it came to my awareness that the message was more for me than the ladies. I needed to be reminded that even though I don’t see myself having strength or confidence in what I can do, “I have the strength to help them (others).”

I’ll never forget this experience. Now that I’ve read more and talked to some others that I can trust, I see it was an angel. No, the guy didn’t have wings. He was tall and slender and was dressed in an ordinary way. He looked like an ordinary person with a baseball cap on and a shirt and jeans.

Even though the two ladies had soot and smoke all over their clothes, this guy was clean as if none of it rubbed off on him. Even I got soot on me when I helped them to the chairs. He was dressed so plainly, and his only intent was helping these ladies until the paramedics arrived. After that, he just walked off down the street and disappeared and vanished into thin air.

It reminds me that no matter what, angels are there for us and helping us when we need it most. Even if we can’t see it, they are there. I doubt most in the neighborhood saw him.

Angels are not “church figures” to me, like some people believe. They are highly evolved figures of the highest consciousness. They are there to help with pure love and without judgment.