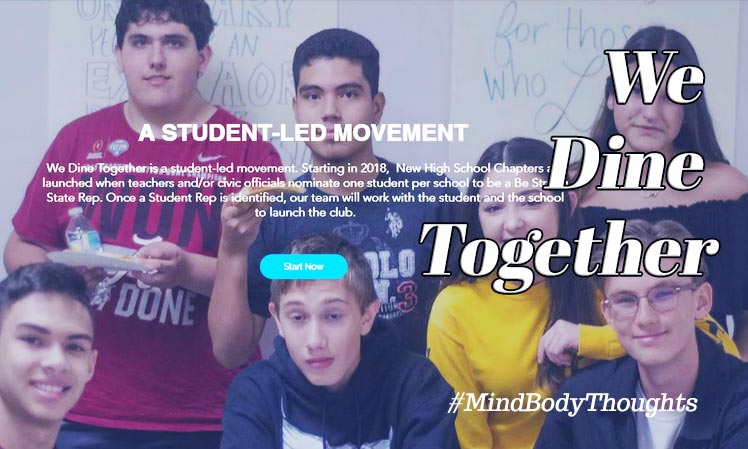 I came across a video report that was about a program called “We Dine Together.”  It is a story about some students in Boca Raton, Florida who make sure that no one dines alone at lunch.  They go out of their way with empathy and compassion to make a difference.

In my view, this is precisely the kind of action we need to see in this country.  Far too many times, the adults are online screaming about what they perceive the latest political or headline news tirade to be.  I hope that the kids in this country are saying enough to that, and maybe this is an example.

I grew up in small schools, so I can only guess at how difficult it is to be alone in such a big school.  My graduating class was 42, and the overall school population was around 400 students in K-12.

I’ll never forget all the times that we moved growing up.  I would just start to be making friends, and then something would cause us to move again to some new town.  Internet in those days did not exist, so staying in touch with anyone was not easy.  I learned to be a loner or be friends with people, but not get too attached.  After all, I knew we would be moving again.

And then there was that time growing up when I could not do first-grade math, and they held me back a year.  Here you just started to mix in with kids your age and the next thing you know, you were back with kids you didn’t know.

Each time walking into a new school, I felt my stomach drop into despair.  It was that sickish feeling I would get of being alone and afraid in this new place, not knowing anyone.  There would be horror and embarrassment as the teacher took me to the front of the room and announced that I was the new kid.  I know they meant well, but it was not easy for me.  After all, I knew that my time there would probably not last very long, so why get attached to anyone?

Bullied on the school bus and the playground at lunchtime was normal for me.  I remember the teacher who ridiculed me time and time again for not doing book reports the way she wanted.  While I didn’t see much difference between mine and other kids, but she always made me an example.

One time in grade school, I remember seeing some film about being a loner.  It felt like the message was if you were a loner you were going to die.  Since it was so long ago, I can’t recall the details, but it made me afraid of being a loner.  I was one.

Even with the people who graduated with me in high school, I didn’t really feel like I belonged.  Many were nice, but there were many that didn’t want much to do with me either.  It didn’t help that my older brother was a bully and most people despised him.  It didn’t help that we went to this strict fundamentalist Baptist church that kept me out of dances and other activities.  Even though I wanted to be involved in high school track and other activities, my dad made clear that I had to come home and work.  He had no interest in me being involved in anything.

These days, it is not easy being a kid.  Adults don’t make it any easier for the kids.  So, if they can do something that embraces empathy and helps prevent suicide or mental health issues, I am all for it!  Maybe they can be a model to the adults in how to live life and care about other people.

I urge you to see the article and video on “We Dine Together.”

Read More About “We Dine Together”

CBS – High Schooler- No One Should Dine Alone