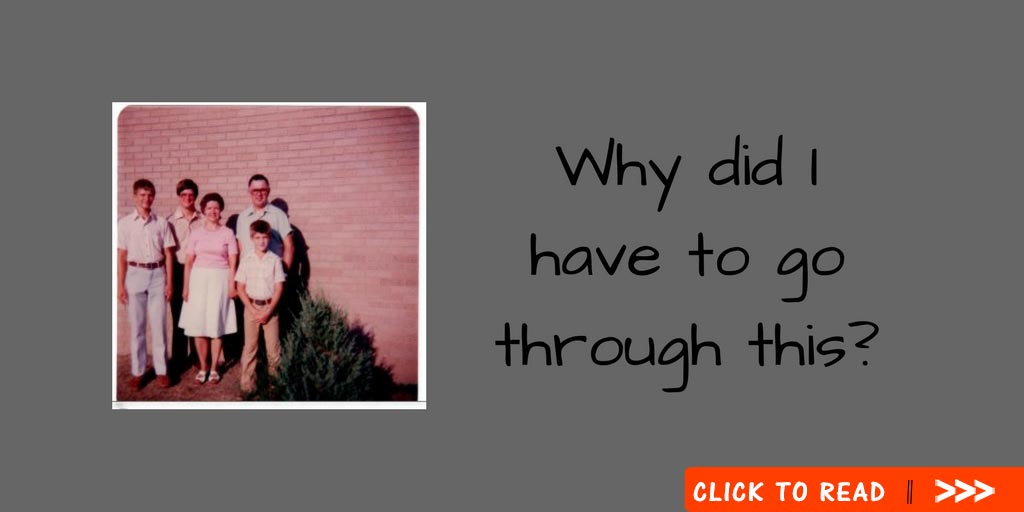 Why Did I Have To Go Through This

Don Shetterly 0 May 7, 2018 12:02 am
Helping Prevent Suicide
When A Reading Does Not Give You Closure
The Mental Health Secret Of Holden On

This blog post was reprinted from my journal on March 25, 2006.  The subject of this post is why did I have to go through this.  Hopefully, it will help someone else that is going through things similar to what I experienced. Regardless of what you may be facing, things can get better.  It takes time and healing, but as I have found in my life, there is a way through it.  Reach out to those who understand and seek the help that you need.  Don’t suffer in silence.

I wondered for a long time, why did I have to go through this?   There are times when I still don’t understand, but it is a question my mind tries to answer.

The following portion is from my journal:

I often thought that I was adopted growing up.  Even though I see my actual birth certificate and I have a lot of physical features that correlate to my family, I couldn’t always help but wonder if I was switched at birth or adopted.  Of course, I doubt I was – in all reality.  But that doesn’t stop me from feeling some of the things that I do.

In 1991, I ended up getting a very nasty letter from my mom (written of course to explain how I had hurt my father and her of course as a result).  My mother always had to write what my father was feeling because he didn’t’ know what he was feeling and he was too stupid to write a complete sentence (no joke on that either).  All I had written to them was that there were some hurts we needed to work through and some issues.

It wasn’t a threatening letter or a hurtful one.  It was saying we needed to deal with these issues.  And so that year instead of getting a birthday card on my birthday like every other birthday, I got a letter about two weeks later ripping me to shreds and I mean, ripping me to shreds.  If it had been a knife, I would have been carved into a million pieces.  I cried for days after that and almost killed myself.  If it wouldn’t have been for a friend spending the weekend with me and letting me cry my eyes out, I wouldn’t be here today.

But not long after that, I had so many anxiety attacks just going to get the mail from my mailbox thinking there would be more of these letters.  And there were more letters.  They didn’t stop.  Finally, I made an agreement with my friend that any letters they sent, I would give to him and if there was anything I needed to know, he would tell me.  He constantly told me there was nothing I needed to hear.  And so at that point, I stopped all contact with my family.  It was one of the hardest things I’ve ever done in my life and it hurt so deeply especially with my mom.  My father and older brother, I could have cared less about and still feel that way about them.  As far as I’m concerned they can rot in hell for all I care.

For the longest time, even though I knew I had to cut off all contact with my family, it felt like someone had ripped a big hole out of my body, my life and my spirit.  It was a gapping hole that nothing could fill.  Yes, holidays would come around and maybe someone was nice enough to invite me over and include me but even though I was grateful, it just wasn’t the same.  Nothing could replace what I lost.  I struggled and struggled with this and fought through every holiday, every remembrance of family and every question that people always asked about my family.  Those questions and remembrances hurt like HELL!  They always left me wondering why did I have to go through this.

Fast forward until today.  Yes, I’m creating a life with Jeff and his family has accepted me as much as they can.  And Yes, I’ve got some pretty close friends.  All of that is great but I still don’t have the biological thread that ties me to the beginning of my life.  The pain has lessened over the years but it is still there.  The wondering about why in the HELL I had to go through all of this still runs rampant through my mind.  And I’m continually left too look from the outside in at families, holidays, remembrances, and memories… only to come up on the short end of the stick.

For as much healing as I’ve done, I still don’t feel like I really belong anywhere.  I feel like a square peg trying to be jammed into a round hole and as hard as you try to jam it in, the only way the square peg is going to get through the round hole is by breaking into pieces.  Some days I feel pretty positive and see how far I have come and then some days I feel like a fucked up piece of shit in society just like my father said I was.  Some days, I get so damn tired of the struggle through all of this and wonder how if there is some supreme being out there…just how in the hell this could be part of any creation.

And I know I can rant and rave all day long and cry a million tears.  I can scream at the moon but what does it get me.  Where’s the peace?  Where’s the rest?  Why did I have to go through this?  Where’s the healing?

I so badly want to be that little boy that my mother could have taken in her arms and protected me from the evil monster, letting me know she loved me.  And yet.. I was that little boy, but she wasn’t able to do that.

So I go on trying to find my way through what was heaped upon me at birth.  The answers seem often to hide from me, but the pain is always present.  I’m strong enough to keep fighting and I have the courage to keep going but sometimes having the strength to see the vision of what’s ahead is the hardest part.

And yet, feeling like a square peg in the world going into a round hole…just doesn’t feel good at all.  But that’s where life has taken me to this point.  How I get from this step to the next, I have no clue.  And if anyone thinks that abusing a child for one moment of their life doesn’t hurt that child forever, let them come talk to me!

That is some of the stuff that swirls around in my mind and I just had to get it out.  Some days, it is more than my mind can hold.

Fortunately, things have significantly improved for me.  There are many layers to healing.  I continue to find my way through this torture and trauma I experienced.   In the years since I wrote this, I have come so far in my healing.  In fact, looking back at what I wrote, I can see it now more clearly.  Writing and journaling help.  In addition to helping me process things during the rough moments, it provides a mile marker of progress.

Why Did I Have To Go Through This?

You may be asking the question also, why did I have to go through this?  If what I wrote resonates with you, don’t feel like you are alone.  You are not alone.  Many others have walked these difficult paths. Seek the help that you need by reaching out to others that are fighting to win the battle.  Yes, it might be frightening to allow yourself to become vulnerable, but it can be well worth it.

We can look at our lives in so many different ways and come up with all kinds of rationalizations, but to the mind and body that endured too much, it still asks the question, why did I have to go through this?

Don’t forget to check out my book, Hope And Possibility Through Trauma